I want you to stop for a moment. Think back on dumb things you did in high school. Like really dumb things. Like things that were ignorant, that you would be mortified if you did now. I’m pretty sure you came up with something. Now, other than your friends at that time, and maybe your family if you were busted on it, no one really knew about it or knows about it now. Right? I may be totally wrong, but the majority of us got away with a lot of crap as high schoolers. What idiots we were. Man we were lucky.

Our students, children, kids in our communities, not so much. They don’t get to be lucky. They make the same stupid mistakes that we did. They also do awesome things too. The bad part is that when they do dumb things, it becomes viral. It gets posted online. The local media picks it up and does news stories on it. Now that dumb mistake is pure drama and punishments for embarrassing the __ (insert school, family, etc, here) are handed out.

I preach time and again that we need to educate kids on how to have positive digital footprints. How we need to watch out for them, spy on them, what ever it takes to teach them how to do this. So if that is our jobs, why on God’s green Earth are the adults publicizing these dumb mistakes? Why are adults not trying to protect them? We are the adults here, right??? We are those in the community trying to teach them not to pass on post that shouldn’t be there. We are the ones teaching them when someone makes a mistake not to post it. I tell my students time and again, when someone does something stupid, you posting that online and getting others to dislike them or laugh at them is BULLYING.

So why my rant? Well I don’t want to get into too much because I am no different then, but most of you know that I used to be a cheerleading coach. Well as teachers and coaches, we get those groups of kids who some how carve their names on your heart. Well there was this group of girls who did so. They could brighten my day no matter what. Even when I wanted to scream at them and make them run for all of practice, they would some how make me smile. So those girls are seniors and juniors this year. They make a stupid goal post sign. Really stupid. Some turned into a racist (no it is not a black/white thing) comment. They were trying to be funny and catchy with their sign. Well pictures were taken and by the time I woke up on Saturday morning they were all over the internet. No one brought up the fact they were unsupervised. Punish someone, punish the adults who should’ve been there helping and guiding them. Telling them they were being boneheads. I know I would’ve told them that.

My point of all of this, adults need to be guides. They need to tell kids when they are doing wrong without public humiliation. See a kid posting inappropriate stuff, go to kid and parents to get it taken down, not superintendent till get them kick off sports team. Or post on Facebook the picture along with your “outrage” of there actions. Or write you news report and broadcast it report every 30 minutes. No one knew anything was there until YOU told them. They are children, people! They may look like adults but their brains are not there. Just like ours were when we were that age. Unless harm is being caused, step in as an example, as a guide, as someone who could use it as a teachable moment. Stop it from an embarrassment. Let’s not humiliate kids.

On a ending note, NBC 13, you want a story about a sign from MHS? Here you go. These same girls you embarrassed on your broadcast made this sign a few weeks ago in game against Brookwood. If you don’t know about #teamkelsey, Kelsey is a cheerleader on the opposing team who has bone cancer. They wanted to show her support and let her know how much they care. No one asked them to do this, they came up with the sign themselves. That’s the kind of girls they are. Not the racist heathens trying to get one passed everyone. 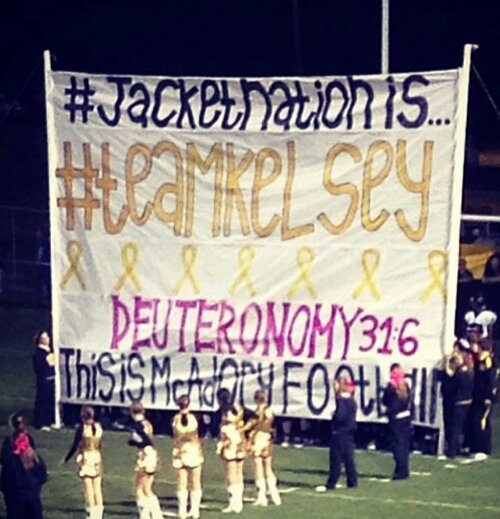 Update on 11/22
I just wanted to add this quickly:
If your comment mentions the school name or what sign says I will not approve your comment. My job as an educator and an educational technology and social media expert is to protect children and not put online anything that could add to their digital footprint negatively. This also goes to my employer. If you have noticed never on my blog has my school name or district been mentioned. Yes the school name is on the sign but a word on the picture is not “googable.” Also the quote in the sign will not be printed. That would be the point of the post, I will not spread the mistake. Lastly, before you start blaming my coworkers and calling our school below par, 1. Find a new forum for that 2. Look up state curriculum, take it up with lawmakers. I will not add to you harassment and the whole adults acting like children. Sorry if this upsets you.