If is funny when people remember what you said years ago. About 9 years ago I was at my husband’s (who I was dating then) great uncle’s house for less than 10 minutes but while there I saw this basket in a corner and realized it was LIFE magazines from major events during the 1960’s. I made the comment that it was a gold mine and that I would love to go through those. Fast forward to a few months ago when his great uncle passed away. His cousin Katie remembered that I liked the magazines. So yesterday my mother-in-law gave me a huge box of them. Of course I was in heaven. Articles by Martin Luther King Jr., Moon landing, Memorial of Apollo 1, tons of JFK, and even an article about how Nixon followers are all moving into Watergate – I know, right?! 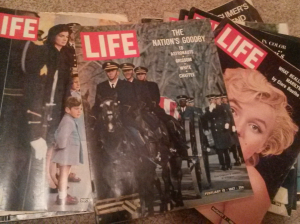 So while flipping through history, and kind of sad that we won’t have print like this in the future, I found an article interviewing Howard Howe II the U.S. Commissioner of Education in 1967. Now as someone as from the south I know that was a headache of a time to be in that position, this was during desegregation in the south. (You know, because here in Bham we are celebrating 50 years of civil rights while the rest of the country had been desegregated for 150+ years #thingsIdontunderstand) People were not happy on either sides at the moment. You think Arne Duncan has it bad taking over with CCSS and reform, nah can’t even compare.  So anyway the article had a bunch of his quotes bullet pointed. I really liked these, so decided to share with y’all. And of course comment, because I’m never straight to the point.

We continually have to be asking, “why are we doing this like this? Only because we did it like this last year?” We shouldn’t back into the future looking wistfully at the past.

How about that? Um, yeah! Why 50 years later are we still having to remind each other this? I know it is because as humans we become comfortable, but it is sad when that happens. We have all been victim of this, but every year we need too look at our jobs whether we are classroom teachers, instructional coaches, or in administrative positions and think, “how can I make this better?” 1964 NASA was in the beginning stages of Apollo, what if they were still doing things the same? Thank goodness we still don’t do school the same as in 1964…Oh wait…oops… Ok scratch that, let’s start looking toward the future and not forget to ask these questions.

I like E.B. White’s book The Elements of Style. Style is one thing you don’t find much of in the educational world. Administrators and school superintendents tend to not express themselves very well on paper. I’m engaged in a minor war on this in the Office of Education. I have been trying to goose the establishment into a more direct way of saying things.

I love this. I hope blogs are changing this. I think they are to an extent. Finally 50 years later. But how many admins in a district do, probably a crazy small percent. I also see how so often the ones that are are having to defend themselves, Howe was on to something here. I think he saw the value of blogs, long before blogs!! This can go for teachers as well. We do need to reflect, we do need to teach each other. Admins, you are the leaders in your school/district, step up. Teachers would rather learn from reading your thoughts and ideas more than from a principal on other side of world. Also, I am terrible at grammar, maybe I need to download this book…

The tough thing these days is to get the innovations that are going on in all the federal branches of government together and to make sense out of the grand scale – coordinate them some how.

Yeah, do I really need to insert something here. At least we know it isn’t a new thing. At least websites couldn’t crash back then, paper always worked.

The influence of kids on each other in the school is very interesting. The survey of over 600,000 kids we did as requested in the Civil Rights Act shows that disadvantaged kids don’t think it will do any good to work hard and achieve because it won’t make their over-all chances of success any better. Put these kids in with kids from advantaged families, and this attitude definitely changes for the better.

Hot dang! Ok so some of you have no idea of my school’s demographics, but lets just say we have every one. It is a crazy mix. It took me months to get used to it. But I totally see this. I can’t usually look at a student and know what socioeconomic background they have, neither can kids, but those lower income kids know and know they get same opportunities. He was talking about race here, my school is almost 50/50 and race comes up less than you think it would. Kids are used to their friends being of different races. On the flip side, this can have an opposite effect. Students from a culture of apathy can disrupt and rub off on students whose parents have higher expectations. Especially in my grade, 6th, where kids are learning who they are. This is when your influence is most important.

So he was right on with a lot of stuff. BUT not everything. This is the quote that broke my heart

I have always thought schools should be in a state of controlled unhappiness. There is a gumminess about a happy school that is almost fruity. Ruts develop in any institution, especially schools.

and I am afraid this is a trap we all can fall into. I’m bad about it, getting in the “do what you’re told” mindset. Why should kids be subjected to 7 hours of “controlled unhappiness?” I don’t want that for my kids nor my students. I like fruity, I mean who doesn’t want a Starburst now and then? Hopefully we have leaders who no longer think this, yet are our schools “happy?” Should they be? I hope so.

Any way, I wanted to share this little treasure and of course throw my thoughts out there. Happy Thanksgiving. I’m thankful for all of you and your encouragement and your leadership!