“Any girl can be glamorous. All you have to do is stand still and look stupid.”

Hey y’all! I’m still alive. I think this is the longest I have ever gone between posts. But I’ve been busy. I’m a mom as most of you know, and those kiddos take up a lot of time lately! Also, I have 2 teams/sports I obsess over, the University of Alabama Crimson Tide football team and the Boston Red Sox. Well the Sox just won the world series and Bama is still kicking tail and undefeated. Then throw in a brand new (unwritten) curriculum, the struggles I’ve been working through there, the GaETC last week, I’ve been busy. Did I mention I have 2 kids?! Anyway, I was beating myself up last week for not taking the time to write and had a pretty cool person (really a mentor, but don’t tell him that I look up to him, it’ll go to his head) last night remind me why, life is busy. My first thought was “Being a woman is tough!” It is, but being a woman is confusing too. This has been on the crazy mind of mine lately, and y’all know what goes in, a lot of times comes out here. So here we go.

“The world isn’t getting any easier. With all these new inventions I believe that people are hurried more and pushed more… The hurried way is not the right way; you need time for everything – time to work, time to play, time to rest.”

Yesterday was my idol’s birthday. (Well the idol not my mom, who is a successful business woman, amazing mom and “Munner”, and cancer survivor.) Her name is Hedy Lamarr. I have mentioned her before and every woman should read her biography. She was smart, beautiful, and a bad girl who took a huge chance. She went from a marriage where her job was to stand there and look beautiful and being hostess to taking that beauty and becoming one of the most wanted actress of her time. But you see, she didn’t just stop there. She was smart. Not only was she already educated, while playing hostess to her Austrian husband pre-WWII, she learned a lot of secrets of what went on behind the scenes when preparing for war. More than just guns. She took that knowledge and her studies and along with composer (yes music composer – music and computer science can be so close to the same at times) George Antheil came up with the “Secret Communication System” that allowed the submarines to change the frequency to their radio controlled missiles and stop enemy interception. It used Frequency-hopping spread spectrum. Sounds like spy stuff but you are using that technology RIGHT NOW. Yeah. This allows things to have their own frequency, so now can talk over electromagnetic waves privately. Sounds complicated, right? Nah, it is pretty much how your cell phone works. Yeah you have a cell phone because a woman was awesome. Not only that but using that technology, you have wifi. So the beautiful woman who was the first to make a R Rated movie, is the reason you can watch an R rated movie anywhere, any time. Thank goodness she married an idiot who made her dress up and attend all of those meetings where she learned all she needed to know. Don’t underestimate the quiet and beautiful. Or do, and she will bomb your butt. (BTW she is the voice behind all the quotes mentioned here.)

“I can excuse everything but boredom. Boring people don’t have to stay that way.“

So this week I was at GaETC. I had 2 sessions, and both I had to start early because the room filled to capacity. (It was a small room, I’m not that popular.) But the room was filled with women. We are teachers, it is a profession where women are the majority. I noticed the percentage during my session, then afterwards someone pointed it out and I was reminded of this post by Amy Taylor (another beautiful woman who is awesome and has the power to bomb your butt too). She talked about how only 3% of creative directors are women. When she wrote the post I had it in an open tab for a long time. It was one of those post you really want to comment on and can never get the time or thoughts together. So here’s the comment Amy! I think girls do become creative women in a creative field. But I think because of our influences we don’t choose the path creative men choose. Think of the most creative, fun, inventive woman who influenced you growing up, she was probably a teacher or a stay at home mom. I say time and time again when working with teachers and technology, teachers are the most creative people I know. When you take the fact you were probably influenced by one and then add that some of us have that natural maternal instinct (I think my instinct is broken but then I was put in education school by accident, not a chosen path) and teaching becomes a natural choice. In college it is a place you fit and full of people like you, so why branch out. I think that is FANTASTIC, but I think as teachers we need to take the time to introduce other STE(A)M fields as well. Would’ve been sad if Hedy had just stuck with the norm. We may just be getting to Zack Morris phones in 2013, not smart phones. That would totally mess with Moore’s Law, huh?

“All creative people want to do the unexpected.”

But back to making sure girls are aware of other STE(A)M careers. Get them in STE(A)M courses. Put them in a makerspace and let them make! We need to give all kids, really, the chance to be literate when it comes to technology. We need to make sure they have the skills beyond Common Core. We need to show them where these skills can take them. And we need to make sure we are not underestimate girls. We need a generation of amazing women who are powerful and think they can do anything. There is nothing wrong with being a teacher, but so many teachers quit after their 3rd year. We now know it is because of burn out, but so often I wonder if that burn out is caused because it was just not the right career for them but they are unaware of the other options out their when in college. Girls move in packs, the packs are in education schools, teach them to be confident enough to leave the pact and go out on their own!

“Hope and curiosity about the future seemed better than guarantees. That’s the way I was. The unknown was always so attractive to me… and still is.” 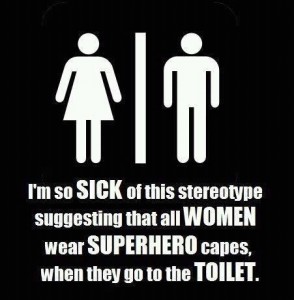 Lastly, don’t judge a woman by her cover. Women are the WORST at this. We all know, women dress more for women than men. We judge and it is not always nice. Don’t think the pretty girl isn’t smart. Don’t think the homely  girl is just a wallflower with nothing to offer. During the conference last week I had a woman tell me after the session that “many didn’t answer your questions because you are a blonde dressed up who knows what she is talking about.” That really bothered me. Women, we need to be each other’s biggest supporter. And while I LOVE fashion and shoes and even make comments about it, I could not imagine judging someone on looks and clothes. As a mom of a beautiful blonde, I have this hope that people judge her for her kindness as well as her brilliance. But I judged her. She is a girl who is an artist. I always call my son “my math kid.” So met with the gift teacher at her school a few weeks ago, she will be in the program next year. Her test scores tell us that she is in the 97% in math and science. Yeah she is my “math kid” but I judged. Even though the other day she came running in the room to tell me she figured out how to divide. She is 7. Only info she had to go on was that I told her dividing was like subtracting, the opposite of multiplication. I’m a math/science brain. Who am I to judge?! If I judge my own child, what on earth am I doing in my classroom??? Lets kick stereotype butts. Be a mentor. And don’t leave the boys out, they need the encouragement and education as well.

“I think women are concerned too much with their clothes. Men don’t really care that much about women’s clothes. If they like a girl, chances are they’ll like her clothes.”