I’m going to write this and it is not going to be easy. And if he was still alive he’d be so angry at me for writing it, but he left me here on earth with just memories so he gets no say. That “he” is Dean Taylor. He died Saturday morning in a car wreck. And he was my friend. My one of my best friends. He was also a dad that loved his son so much and a businessman always looking for investments. Dean was a school board member in my district, the board president at one time, which is why not many knew of our friendship, politics are blah. But it is funny, we became friends because he was always trying to learn more about education and always had questions, but in the end he taught me so much more.

You see, he was so proud to be a board member. Think of that one person that you know that puts their all into their job, that was him. He told me a few times that he went to a ribbon cutting one day and went to bed that night a politician. But more times than that he would say that he was there to make a difference. He was a dad and wanted for his son what every parent wants, but he had the position to make sure it happened not only for his son but for everyone’s sons and daughters. All 37,000 sons and daughters, as he would say. He would tell stories of how he was not supposed to be as successful as he was (he was a pretty successful businessman and never took it for granted) and he wanted every kid in the district to know that if he could do it, they could too. I would get so mad at him for putting himself down and he’d get mad at me for making that comment and say it isn’t about him. He was in the Air Force and would tell me stories from war and end by saying that God didn’t let him die because he was supposed to be there to fight for kids like him. Every single war story ended with that. He believed and he lived to complete that mission.

But here was the thing, while he was always about the “underdog,” he never once treated anyone as the underdog. He knew every single maintenance worker by name. Was actually became close friends with many of them. He would bring them water in the summer. He would mention them when telling me a story and act like I was weird because I did not know them.  He would compliment custodians on how clean their school was. He ate in a school lunchroom at least once a week, usually more, and would not only sit with the kids but compliment the staff on the great food. He went from unknown new school board member to in the press every week because when we had cut backs and the majority of secretaries in our district were going to lose their jobs, he fought until the cuts were rescinded.

He had this amazing ability to make whoever he was meeting feel like what they were saying was the most important. He was in the schools, all 56. He’d ask me everyday, “what school did you visit today?” And then “Did you talk to ___?” I’d answer then ask him the same. He was in the schools as much as me but had the gift of meeting so many more people when there. Those people were important to him. He let them know how important they were. 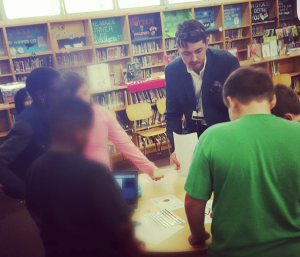 He made students feel the same way. I was looking through pictures today and saw the one above and could hear him asking the kids to explain how it works. A friend told me yesterday he was supposed to be at her school next week to talked to a group of boys that were always in trouble. He worried about those students more than any. He worried that too often we focused on the kids that were gifted or already college bound and left the rest behind. He would talk often about how he never had teachers that believed in him when in school. We always had that in common. One teacher even wrote in his yearbook about how he would not succeed. It crushed him, but mostly gave him the push to become the man he was. But he would say that he never wanted a student to feel that ever again. He wanted kids to have someone to believe in them. He wanted them to know that college was not always for everyone and that was ok. He was telling a class the other day that each of them could be anything they wanted, and he truly believed it.

He was always on a mission to help someone. He would do the kindest things but usually did them secretly. He would call me and ask what type of tech would a certain school needs because “rumor” was that a teacher was about to get it anonymously. That was him.

He was a huge supporter of STEM in schools. He knew that it would reach students that textbooks didn’t. We would talk STEM all day. He loved LEGOs. Like always had a LEGO minifigure in his pocket. He had 100s. So makerspaces were a natural draw for him. He loved it all from coding (he was the biggest supporter in my district for Hour of Code) to 3D printers. He was always trying to figure out how to get more in our schools and if you asked him why, he would talk about the importance of it and how it would reach all students. All students. That was important to him.

He’d be the first to admit when he was wrong. He would tell me over and over that if I ever blamed others, then I was still at fault. He told me all the time that I had to find my issues first then I could blame others, but by then I knew it was my fault. Oh he’d make me so mad making me face my demons. But then he’d congratulate me when I would figure it out. I don’t like the thought of this cheerleader being gone.

In his honor I am going to remember the underdogs. Who are not really underdogs, because he was proof that anyone can do anything. He was proof that drive and self confidence is all you need. He had both. And maybe fake glasses that made you look smarter.

Goodbye my friend. You told me that we were separated at birth and I was the crazy twin. I will miss my twin. Though I only got to know you for a little over a year, you left your mark on me and I will forever remember to continue your legacy and treat the custodian like the CEO to be the voice for students that don’t have one. Also, I hope God had a closet full of shoes for you. Oh and yes I wrote this on my Macbook just for you. 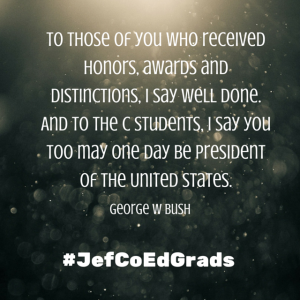 This was his favorite quote. Said it all the time in his best southern politician voice.

3 thoughts on “There Are No Underdogs”