Last week I got to be part of 2 amazing opportunities. Two opportunities that only happened because of social media. Who would’ve thought 6 years ago when I started tweeting and a year later blogging that anything would come of it? But it has and because of social media I have a voice. We all do. And as last week unfolded I saw how important that voice really is. I wasn’t sure I wanted to share about the opportunities because I didn’t want a ‘look at me’ situation. But as others keep asking about it and more I decompress what I learned, I feel like I should share.

On Wednesday I left work to get on a plane and head to Seattle. The whole thing was surreal because I was heading to The Bill and Melinda Gates Foundation. If you are in education and/or follow education reform, you know this is the most influential organization in education. That can be positive or negative, depending on who you ask. I have yet to figure out why I was asked, but definitely honored I was. While there we had meetings where we talked about teachers in social media. Meeting with the brilliant Vicki Phillips and Carina Wong was pretty cool, women who have so much influence on me as well as in education. The best part was after lunch, meeting with Melinda Gates, yes THE Melinda Gates. Kinda crazy having someone with this much influence on the world actually asking our opinions and what we know. I rarely get asked that in my own office. 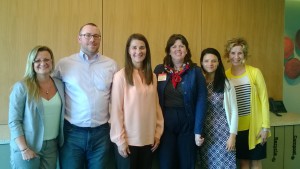 I left Gates and hopped on a red eye – one that was late – and went to Washington DC. Another very cool opportunity, I was one of 100 who got to attend Edcamp Dept of Ed. So I spent the day meeting and having open discussions with educators from around the country. Some were my favorite people I rarely see face to face, some were others that I have never met or had conversations with. Huge thanks to Richard Cullata and his office as well as the amazing edcamp foundation for this day. A day spent brainstorming and comparing and sharing, you cannot beat that. The day ended with Arne Duncan telling a pretty touching story about a student in Chicago (don’t worry, I will share in another post I’m working on) that was a huge reminder of why we do what we do. 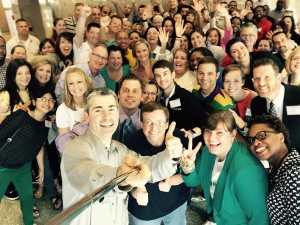 I look back on these whirlwind days and one thing was a constant – Teachers have voices. Teachers need their voice heard. I hear over and over, we need to do this, teachers should do that, but no one actually stops and asks the teachers. I think if Melinda Gates and Richard Cullata can stop and take a minute to hear what teachers have to say, and really listen, then why are we not doing that at a school level, a district level, even a state level? We are the experts. Yet politicians around the country are deciding on testing or trying to do away with standards, but they are not taking the time to listen. We can tout education reform all day every day but until it starts with teachers, the ones on the ground floor of this, there will never be any reform. And the scary part, real teachers, talented teacher, will become more and more frustrated and leave the profession. My children need good teachers, they need teachers who feel like they are making a difference, not just filling out paperwork and adding to data.

Also, teachers, make your voice heard!! I never imagine anyone would actually read my blog, especially people who have huge pull in the education world. But people do. You have a voice. Use it. We preach about student voice and real world audience, but you need to practice this as well. I know we have to be careful what we say, we need our job, but when you learn something, share. Others want to know!