Few weeks ago I attended a “Education Symposium” at Dekalb Office. The conversations of the day focused on learning spaces. The first session focused mostly on libraries and that afternoon more toward schools and classrooms. One thing that was brought over and over was the idea of areas in schools with a coffee shop atmosphere. Some schools were even putting coffee shops in their libraries.

As these conversations were happening I kept thinking about a book I read months ago. The book, “Hedy’s Folly” was about an Austrian actress/inventor who built radio guidance systems for torpedoes  for the US during WWII. (If you need a brilliant woman hero, this book is worth the read.)  Anyway the book has really nothing to do with schools and coffee shops, but the first chapter focused on pre-Holocaust Vienna. According to some history (which has been debated – why I took a few weeks to finish this post, I wanted to research this), from the late 1800’s until the war, Vienna was a breeding ground for new ideas. Vienna during this time had a “cafe society” where neighborhoods had central cafes where people would gather and discuss ideas. Since the country was a monarchy politics were not as often discussed or debated (which came later unfortunately) but instead art, psychology, theater, music, and literature. If you ever see the amazing architectural of Vienna it was usually built after the turn of the century. Many novelist, physicist, composers, and even Sigmund Freud himself were in Vienna during this time.  The area was ethnically diverse – the newspaper was published in 10 languages – yet the people found a common place to have conversations. Of course from this came museums, theaters, universities, bookstores, etc, but it all started with this common place for conversation and collaboration. 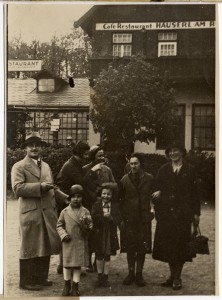 Family outside a Austrian Cafe

So back to schools. Yesterday (which is what prompted me to finish my research on this), I saw a tweet from Josh Stumpenhorst  asking what the ideal classroom would look like. After I and another teacher responded, he said “I want my classroom to look like a coffee shop.” There is that coffee shop idea again. A place where conversation, comfort, and collaboration can flourish. If a city of 2 million people who speak multiple language can be a birthplace of some of the most extraordinary ideas of its time, imagine what can take place in a school of just a few hundred students. Add in whiteboards and technology to jot information on and there is no telling what students can come up with.

I know this would not work in all schools with all students. I do know that if this culture is taught it can become easier and easier to cultivate. I do wonder how behavior would factor in this.

I read an essay that said in Vienna and other European cafes at the turn of the century  “more than coffee was served” and I believe that maybe as schools we need to start serving something more. Something more than just facts and information.